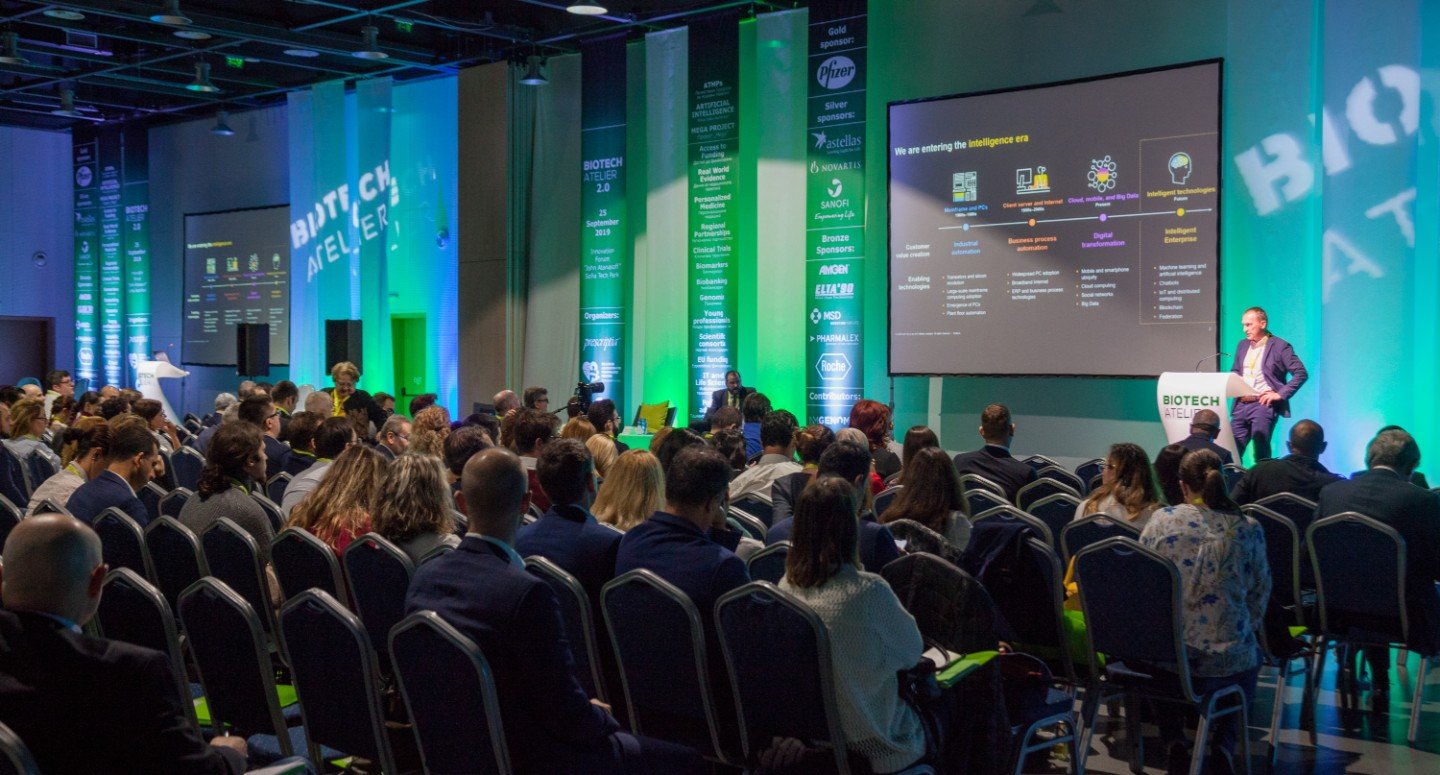 On 25th September 2019 Biotech Atelier 2.0 welcomed 240+ attendees with expertise and interest in biotechnology, IT, healthcare, life science, pharma, regulatory and law. Amongst them were 48 high-profile speakers (scientists, entrepreneurs, futurists, business leaders and investors), who led 10+ hours of engaging panel discussions across 18 topics. They included AI and IT in Medicine, ATMPs, the MEGA project, Biobanking and Biomarkers, Clinical Trials, Genomics, Personalized Medicine, Access to Funding, and much more. One fourth of all guests were high-profile decision makers – board members, c-level executives, heads and directors.

The focus of the edition was on tissue, cell and gene therapies, or the so-called ‘advanced therapy medicinal products’ (ATMPs), with which medicine begins to heal, not just cure diseases. These are not just drugs, but whole complexes of technologies, including transplantation techniques. “The problem is that patients have limited access to these innovative therapies” explained Dr. Borislav Borissov, one of the ideologists and organizers of Biotech Atelier forum. “There needs to be a solution to make these innovative therapies affordable, as they are with no alternatives or analogue and cannot be replaced by conventional ones. This is a new generation; this is a new era in the world of medicine! “, Dr. Borissov added.

The forum also featured the MEGA (Million European Genome Alliance) project whose goal is to collection one million genomes across the European Union by 2022. The aim is to provide access and exchange of genetic data across a large platform through which clinically relevant gene variations are detected. The Danish expert, Bogi Eliasen, from Copenhagen Institute for Futures Studies explained: “Bulgaria is a part of this project with 21 other European countries. The idea of the project is the creation of a genomic database in every country, that takes part in the project. Through cooperation and partnerships between countries, a common database will help prevent and treat many socially significant diseases. Currently, Bulgaria does not yet have its own genomic database, while in England there is one based on genomic information of 100,000 people. Denmark, Finland, Scotland and France are also making great progress. Currently, organizations across Europe are working on cross-border clinical research through this genomic database.” Key stakeholders in the field of genomics also discussed how Bulgaria can use this knowledge and experience for prevention and early diagnostics of a number of diseases.

The topic of effective partnership between industry and academia, between patients and government institutions was hotly debated. The idea of ​​”pre-competitive cooperation” – a new model according to which not everyone should act ‘in their own corridor’, but instead bring together different stakeholders and seek common solutions (including access to funding) would save a lot of effort, time and money and would be much more effective overall. “The secret to success in modern biotechnology lies in shifting the focus from competition to cooperation and collaboration, and to application of a multidisciplinary approach”, the organizers explain. Examples were presented of the implementation of modern technologies in health care, stressing on the fact that digitalization and artificial intelligence do not aim at displacing the human and his mind, but to compliment and support them in achieving better results.

The following morning, there were small ateliers dedicated to specific areas, extremely colorful in terms of subject matter and expert participation. The smaller panels touched upon topics including; access to funding, real-world data/ real-world evidence (RWD/ RWE), personalized medicine and its application beyond oncology, regional partnerships, clinical trials, biomarkers and biobanks, young professionals and their realization in Bulgaria, the role of information technology in science, patient advocacy and patients’ role in biotechnology and life sciences.

At the end of Biotech Atelier, the final discussion addressed the question: “Could life sciences make 10% of the GDP in Bulgaria?”. Mr. Evgeni Ivanov presented data on the state of life sciences in Bulgaria (as of 2017), namely: 22 000 companies or about 6.4% of all registered entrepreneurs in 2007 are in the field of life sciences; the turnover for 2017 is about 10 billion euros (about 7.5% of the total national economy turnover); for 2017 the total number employed in this area is 145 868 or 4.6% of the employed in the country. Thus he gave a positive answer to the question. Yes, life sciences may generate 10% of Bulgaria’s GDP by: aiding and abetting research and innovation, creating a collaborative environment in research and development, and by effective partnership with regulatory bodies and institutions.

Regarding the expectations and future benefits of this large international forum, Dr. Borissov said: “Stable contacts have been established between different participants and specific initiatives have been discussed. That is why, I hope that next year we will show concrete results and successful examples.”

The organisers Prescriptia and the Bulgarian Association for Personalized Medicine (BAPEMED), share a common and very strong belief in the vastly untapped biotechnology potential of the Eastern European Region. By connecting interdisciplinary and interregional high-profile individuals from business and science we promote exchange, collaboration and new business development in the field of biotechnology.